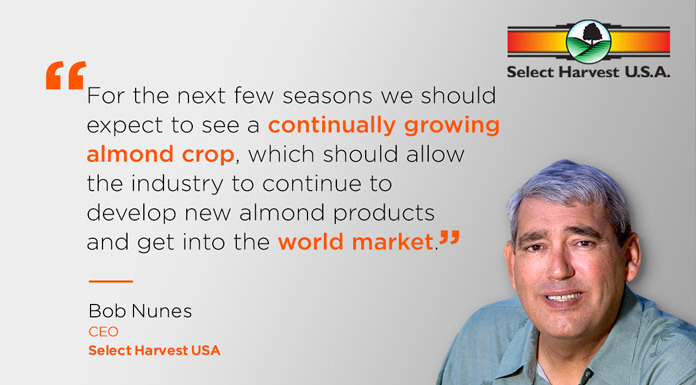 On this episode of Nut News with host Tyler Kern, Bob Nunes, CEO of Select Harvest USA, revealed good news for April 2019 almond shipments after the release of the month’s Almond Position Report. Almonds set a new record high this month with 177 million pounds shipped, a 0.3 percent increase over the prior record of 176.4 million pounds.

Nunes said domestic shipments were off a little this month, but the numbers are still the second largest April on record. Also “very strong” commitment numbers for almonds sold but not yet shipped show a 16 percent increase over last year, Nunes said.

“We’re going to have a very tight transition into the new crop,” he said. “We’re going into the lowest carryout inventory ever.”

The National Agricultural Statistics Service’s Objective Yield forecast for almonds is coming in late June or early July, which is a more scientific report based on actual data of crop samples.

Nunes discussed the continued trade tariffs conflict with China and its effect on the U.S.

“It looks like for next few seasons we should continue seeing growing almond crop…with new products, and new markets,” Nunes said. “In the short term, it looks positive for almonds.”