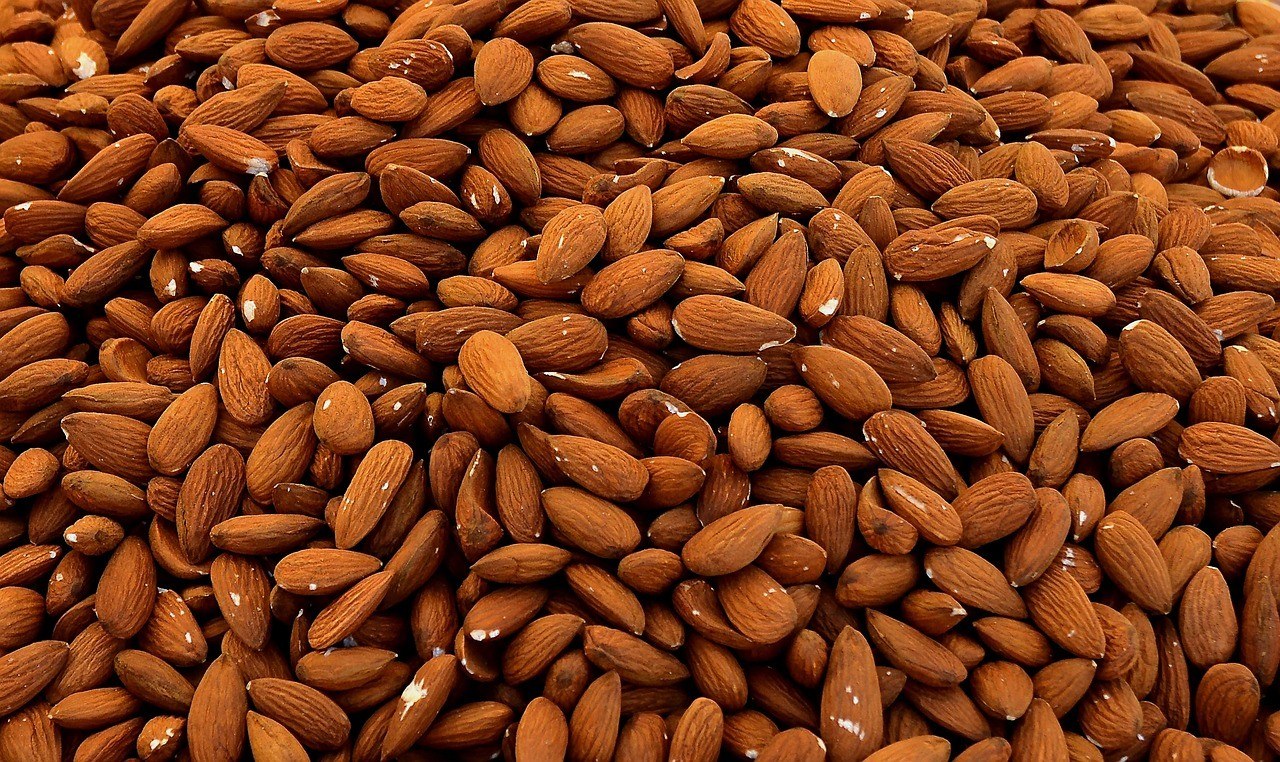 Per November's Position Report, the Industry shipped almost 221 million pounds in November. This is down -16.1% over last year. In aggregate, the industry has shipped -15% less almonds this crop year than last. A YoY slowdown is expected with yield forecast to be lighted. To what extent, has been a question of debate, and one we dive into deeper later; but, current numbers show the Industry has reported receipts of 2.266 billion (less loss and exempt). This is -4.22% from this time last year.

Looking at gross shipments and total commitments as a percentage of total supply, the Industry sits at at 56.6% sold. This is lowest number since the 2014/15 crop year, which was a drought a year.

The industry did record almost 226 million pounds of new contracts in November, which is squarely in line with historical figures for November. The Industry does still trail in total commitments on the books, off -25% in aggregate YoY.

Drought has been a constant narrative. We have a lengthy update in this report yet again. But the impacts of drought can be boiled down to one major principle: supply. Drought can influence fruit viability, kernel size and can stress the trees impacting future crops - all affecting supply. We’ve discussed this before and how it has influenced Handlers’ this crop year. We’ve seen lower commitment levels and volatile prices as examples. The narrative has been that Handlers have been cautious with their forecast and expectations for this year’s yield with the thinking being there was more risk of a shorter crop than there was upside. There is still room for speculation on this, but thought we’d take a survey of receipts, compare them to years’ past and present a few mathematical exercises for things yet to come.

Current figures, after loss and exempt (all crop figures will be less loss and exempt), put crop receipts just over 2.365 billion pounds. This is -4.22% behind last year. All else equal, that projects just over a 2.9 billion pounds for the year. But this is a rather rudimentary projection. Just last month the same simple math would have calculated over 3.0 billion. It might be best to take historical figures and current trends into account.

Over the past three crop years receipts through November totaled just shy of 83% of the eventual receipts. The highest over that time period came in the 2018/19 crop year at 87.5%. Applied to current receipts you’d calculate a 2.79 billion pound number on average and 2.64 billion using the 2018/19 figure. For the record 2020/21 saw the lowest number through November as a percent of eventual yield, so the 2.9 billion number previously mentioned would be the same math here. So now we have a range of 2.64 billion on the low side and 2.90 billion on the high side.

December receipts will get us to an average of 96% of eventual receipts, which in turn would make forecasting December’s numbers of consequence. We again looked at the last three crop years for trends. One very interesting one immerged. In all three of the previous years the largest gross receipt month was October. In the current year, peak receipts occurred in September. This could suggest that some hulling and shelling facilities have ended earlier this year and that those still running may perhaps not be running as late in the season. It would not be out of the question to see a more rapid taper of receipts this year. As such we choose to look at historical month over month declines in receipts from November to December and project 2021/22 crop year based off of historical average as well as ‘worst case’ historical scenario to try and account for the possibility of a light receiving month. That produced a forecasted range of 311 - 357 million pounds received in December. Add this to our current receipts and project forward based on a historical average of 96% of eventual supply through December and you’re in the 2.72-2.78 billion pound range. Add back loss and exempt and you're more or less right at the 2.8 billion forecast.

All of that said, an early season peak does not necessarily indicate a short crop. A significant weather pattern hit much of California in October which very well could have hindered throughput. We also observed that the early onset of harvest strained many handler's capacity to receive product with some asking for reduced throughput from hullers. leaning to the lighter side of historical receipts may not adequately address these nuances. In such a case, a more historical tapering, or even one more closely resembling last year, would more accurately predict future receipts. As such a 2.8-2.9+ crop size is not out of the question either.

There are certainly other ways to do simple forecasting and many variables remain unaccounted for. Either way we'll be on the look out for any possible black swans in December as a light or heavy receipt figure could still influence the market.

Ongoing and future drought concerns loom as a drag on long term supply. That said, the first day of winter is but days away and much of California is currently receiving some much needed rain with the second atmospheric river event of the season. The first was a rare October event, but in between, the state has been relatively dry. In fact, according to a LA Times report, downtown Los Angeles actually failed to record any precipitation in November, the first time this has happened since 1992.

As of December 11, Drought.gov reports that 28.6% of California remains in the Exceptional Drought category – it’s highest category. And 80.3% is in extreme drought. All of California’s almond growing region fall into one of these two categories with the bulk of almond orchards actually located in areas designated as ‘exceptional’ drought. A rough map is shown below:

The Department of Water Resources (DWR), which manages California’s largest surface water distribution system through the State Water Project (SWP) just notified recipients of a 0% water allotment for the foreseeable future. According to a December 1st DWR Press Release, water deliveries will be “focused on prioritizing water supply in four categories: water for health and safety needs and Delta salinity control; water for endangered species; water to reserve in storage; and water for additional supply allocations if the hydrology allows.” The ‘if hydrology allows’ phrase is the key in this statement. Water reservoirs remain at or near historic lows and seasonal rainfall totals well above normal will be needed in order to recharge these water sources to a point where sufficient reserves can support normalize water distribution.

The good news is there is still hope for a wet winter. In fact, as of Dec 12th, many areas of the state are at or above pace for an average rainfall year according to compiled data from the California Nevada River Forecast Center. You can see the data HERE. Redding CA (Proxy for Lake Shasta in Northern CA) is currently 120% of normal. Sacramento (CSUS Campus) and Modesto are 189% and 138% of normal respectively. Fresno and Bakersfield are not far off of pace, both topping 90% of normal. While these locations are good survey markers, rain and snow in the Sierra Nevada mountains will play a larger role in California’s eventual water supply. As the season progresses we will begin to monitor snow pack measurements and water content readings to access likely reservoir replenishment.

Keep in mind that of the locations we reported on, between 75-80% of their annual precipitation would be expected to fall after December 12th when reporting was done. Short term forecasts look promising with the state posed for additional rain this week and another significant system positioning itself for next week. With winter just on the horizon, California’s critical wet season is still to come. There is reason for optimism, but Growers will continue to watch the weather and water delivery forecast knowing California’s exceptional drought conditions are far from over.

A Snapshot of Export Markets

Of the five largest Western European markets (Spain, Germany, Netherlands, Italy, and the UK), all continue to be down at least -10% on the year. Of these five, The Netherlands was the only country to grow YoY in November (+16%) with Spain, the largest EU market, on the other end shrinking -46% YoY. The region as a whole is down -23% YTD having recovered slightly from the -25% YTD figure seen last month. We had heard reports that this region had been oversupplied coming off of last crop year with favorable prices and supply chain constraints fueling aggressive buying as a hedge. If this narrative is to hold true, we would expect to see an acceleration of shipments in the coming months. The industry will need to sell more to the EU markets whether crop size comes in light or heavy, so future shipments and commitments to the EU, and speculation thereof, are likely to continue to influence market volatility.

India still has a strong appetite for California almonds, but the market is off -18% YTD. Over last November, India is down -21.5%, indicating that demand continues to be tepid and has not accelerated. Like Western Europe, the Industry will need to export to India at higher volumes based on current assumptions on crop size. It’s also true that India remains a more price sensitive market and prices having come off of last year’s lows could be weighing on this market. That said, prices have not climbed above historical averages so this may not be a reasonable narrative. It is reasonable however to look at kernel size knowing India prefers a larger almond. Larger sizes this year carry a significant premium and buyers and consumers are going to have to decide between smaller almonds or more expensive ones.

Bright spots include Japan and Korea, which are both up YTD, +18% and +3% respectively. The UAE is flat on the year, but considering its relatively large base and the downward nature of export markets, an even figure is one worth mentioning.

What's Beyond the Horizon?

Handlers and Buyers have been playing a game of chicken it seems the past few months with handlers holding tight pushing prices upwards and buyers staying on the sidelines conversely suppressing prices. December will be the last real test with any substantial influence on crop size. We’d expect more hand to mouth purchasing this month with some buyers and handlers beginning to reconcile their difference and adding new commitments, with others preferring to wait until a firmer picture on crop size emerges. Price volatility is likely in the short term with stability hopefully settling in soon after.