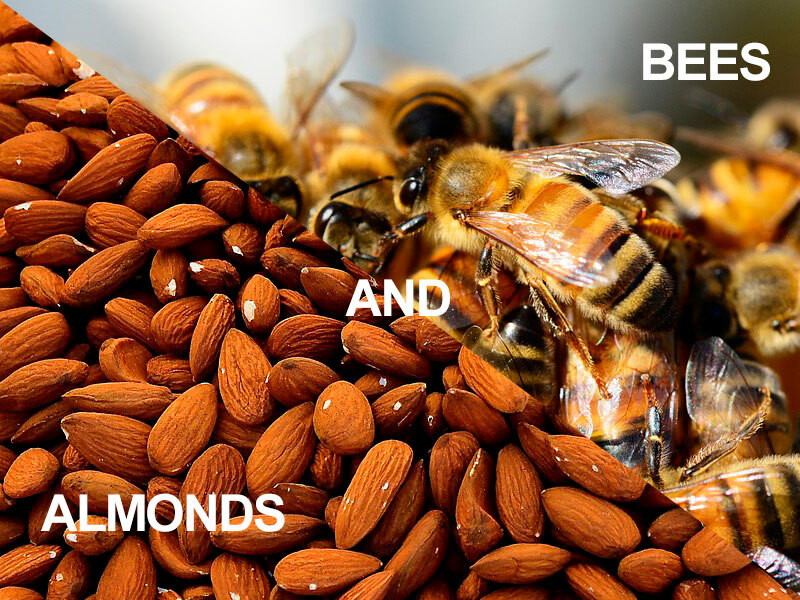 The humble honey bee plays an essential role in providing the fresh fruits, vegetables, and nuts we enjoy in such abundance. In fact, according to Cornell University, bees pollinate around 70 percent of the world’s crops. But there’s one food that requires far more bees to produce than any other–almonds. And while the almond crop depends on bees, it is a mutually beneficial relationship in which the bees benefit as well.

The Special Relationship Between Bees and Flowers

Bees and flowering plants have a symbiotic relationship. Bees fly between flowers, gathering pollen and nectar, which they then make into food, benefiting the bees. When they land on a flower, some pollen rubs off on their bodies, which they then carry to other flowers, inadvertently pollinating the plant and allowing it to reproduce. Although this process happens naturally, mankind has aided the process by domesticating and transporting honey bees for thousands of years. The ancient Egyptians moved beehives up and down the Nile on barges to help pollinate flowers, and early civilizations including prehistoric Greece, Israel, ancient China, and Mayan civilizations all practiced forms of beekeeping. The practice has a long history in America as well. The early colonists brought bees with them across the ocean in straw hives, and when pioneers traveled west on the prairie, bees accompanied them in covered wagons.

Almond trees are fertilized in the same way as other flowering plants. An almond flower has a deep central pollen tube that bees draw upon for food. In order for the almond flower to be fertilized, it has to be cross-pollinated with pollen from a different variety of tree. Bees provide the perfect mechanism of transferring this pollen from the two or three varieties of almond trees that the typical farmer has in his orchard. And in order to create a single almond, an almond blossom needs as many as a dozen visits from bees.

The Meteoric Growth of the Almond Industry

Over the past few years, demand for almonds has skyrocketed. Almond milk, almond butter, snacking, and a host of other almond-based products have entered the marketplace, appealing to people with dietary restrictions or those who simply enjoy the taste. That, in turn, has led to a huge increase in almond production. California, which currently grows 100 percent of the U.S.’s almond supply, devoted a record 1.3 million acres to almond orchards in 2017, an increase of 7 percent from the previous year. That fall, the state’s orchards yielded about 2.2 billion pounds of nuts, equal to about 80 percent of the world’s annual supply. The tremendous growth of almond trees has far outpaced the ability of the indigenous bee population to pollinate them. That’s why almond growers rent bees from beekeepers across the country.

Have Bees, Will Travel

It takes approximately two hives’ worth of bees to pollinate every acre of almonds trees, meaning California’s almond crop requires a total of around 80 billion insects in 1.7 million hives altogether. That’s between 80 and 90 percent of the nation’s available commercial bees according to Gene Brandi, a California beekeeper who serves as vice president of the American Beekeeping Federation. Even in the unlikely event that California’s Central Valley growers were somehow able to breed this incredible number of insects locally, the almond bloom typically lasts for just a few weeks or less in February. That would leave the honey bees living in a desert environment with nothing else to eat the rest of the year. The tremendous demand for honey bees by the almond industry led to the development of an itinerant business where beekeepers move hives to California each winter in what Scientific American calls the largest managed pollination event anywhere in the world. In 2017, a single hive rented for as much as $200 to a California almond farmer.

Each winter, commercial beekeepers throughout the country send the majority of the nation’s commercial bees west to pollinate almonds blossoms. Forklifts lift the hives onto the beds of semi trucks and then cover the hives with tarps and netting so the bees don’t escape. Drivers must keep the trucks moving throughout the day, only stopping at night, in order to maintain cool temperatures for the bees. If the trucks sit for any length of time in the sun, the bees will warm, become active, and try to escape from their hives. Once they arrive in California, the bees will live there until mid-March or so until the almond blossoms fade. Then they will be loaded on trucks once more and be taken to other areas of the country to pollinate crops such as apples in Washington State, tangerines in Florida, and blueberries in North Carolina.

Bees and Almonds Have a Mutually Beneficial Relationship

Simply put, bees and almonds depend on each other to thrive. Almond orchards help strengthen commercial beehives because the trees provide honey bees with their first natural food source each spring. In the same way that almonds are a nutritious snack for humans, almond pollen is very nutritious for honey bees, providing them with all 10 of the essential amino acids their diets require. Beekeepers report that their hives routinely leave California stronger after visiting the almond bloom. That’s a major contributing factor to the strong relationships between almond growers and their beekeepers, which often go back years or even generations. And the practice of renting hives is healthy for a beekeeper’s bottom line as well. In the U.S., renting bee hives to pollinate crops represents more than 50% of a beekeeper’s income, nearly 80% of that coming from almonds alone.

Better yet, a thriving, healthy hive can be split, allowing beekeepers to grow their apiaries. That means that despite the death of so many honey bees over recent years due to issues like colony collapse disorder, the overall population of bees has actually gone up and is now at a twenty year high. Emma Mullen, an associate in the Department of Entomology at Cornell University, told ABC News, “If you track the number of colonies that are in New York or the U.S., they do tend to increase. So what they’ll do is they’ll split their colonies and in that way, they can continue to replace the colonies that were lost and grow their operation.”

The Almond Industry is Working to Keep Bees Healthy

Bees are facing a number of threats including pests, pesticide and insecticide exposure, lack of genetic diversity, climate change, and lack of forage and nutrition. And while the total number of honey bee hives in the U.S. has remained relatively stable for the past 20 years, maintaining healthy hives remains a big challenge. The almond industry is working hard to help bees overcome these factors and get through the tough times. That’s why the Almond Board of California created the Honey Bee Health Task Force over twenty years ago and has funded more honey bee health research than any other crop group, with over 100 research projects to date to help protect them. In addition, the Board has partnered with more than 20 organizations to support bee health including universities, government agencies, nonprofits, and beekeeping groups, and participates in events and summits to collaborate on solutions that will help to achieve a healthy population of honey bees.

In addition, the Almond Board of California is working with Project Apis m., whose mission is to fund and direct research to enhance the health and vitality of honey bee colonies while simultaneously improving crop production. Together, they are encouraging almond growers to provide blooming plants near almond acreage as additional food sources for honey bees before and after almond bloom. As a result, more than 90 percent of almond farms provide clean water for bees to drink and cool themselves while pollinating and farmers have planted nearly 20,000 acres of bee pastures.

To address the ever-increasing demand for pollinating crops such as almonds, scientists are looking at a number of alternatives to bee pollination. Geneticists are developing self-pollinating almond trees to offer growers alternatives to traditional bee-pollinated almond trees. With self-pollinating almond trees, only one variety needs to be planted in the orchard, as opposed to two or three as in a typical orchard. The self-pollinating trees can produce almonds solely through wind pollination when bees are in short supply. They will, of course, produce an even better crop with the addition of bees to the orchard. Parts of China now use an army of workers to hand-pollinate apple and pear orchards. And Wal-Mart recently filed a patent for autonomous robot bees called pollination drones, which can help to pollinate crops. But so far, none of these approaches has proved superior to old-fashioned bee power.

Select Harvest is Proud to Support a Healthy Bee Population

Five years ago, Select Harvest, started its own bee company to take a step toward sustainability. Select Harvest has also made a significant effort to cut down on pesticides, insecticides, and artificial fertilizers, as well as to compost, reduce wastewater, and continually seek to engage in environmentally conscious farming practices such as planting between rows of almond trees to put nutrients back into the soil and provide an environment for healthy beneficial insects. Select Harvest is committed to exceeding the expectations of our clients and consumers, and believes sustainability is a key component of success.

Select Harvest, one of the largest almond producers in the world, is located in the heart of California’s Central Valley. We have over 30 years of experience growing and processing almonds, providing a wide variety of almond products. Select Harvest remains socially and environmentally conscious, adhering to Federal and State regulations and using as many sustainable processes as possible, including recycling packaging materials, electric vehicles, and solar power in order to reduce our carbon footprint. Our goal is to be a leading handler, processor, and marketer of California almonds, with a reputation for honesty, commitment, integrity, and above all quality.

California almonds are essential to the health of the country’s honey bees, as well as the overall financial health of U.S. beekeepers. It is essential to continue doing research on colony health issues and sustainability to ensure that the U.S. beekeeping industry can continue to thrive. So next time you eat a delicious California almond, be thankful for honey bees and their keepers.

To find out more about Select Harvest, go to https://selectharvestusa.com/our-supply/sustainable-farming-practices/.